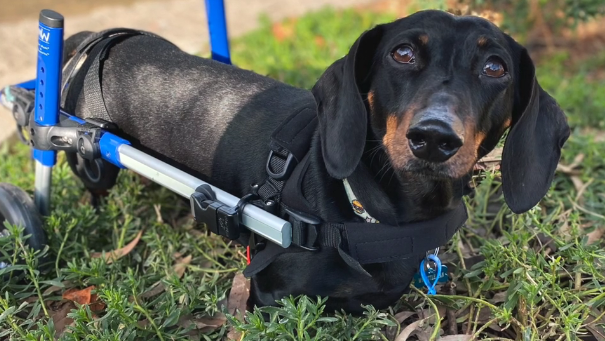 A Wiener on Wheels

There aren’t many people out there who don’t like chips, and we Australians also love a good barbequed sausage. The trouble is we often feel guilty after the indulgence.

Well, all your problems may be solved right now…. Minus the barbeque.

Chip the mini dachshund is quite unique from your ordinary dog. He is a special needs dog where his back legs are compromised.  His previous pawrent was found to be homeless and unfortunately unable to provide Chip with a proper home and the care and attention he required. With his hind legs paralyzed, Chip was found in a garage with several ulcers on his back legs from his continued attempts at trying to walk, in search of food and water.

The little wiener was surrendered to the RSPCA where his current foster carer is temporarily looking after him. Due to the critical condition he was found in, poor Chip underwent 6 months of crucial veterinary treatment and rehabilitation and was also given a wheelchair to help him walk!

Despite his several months of intense recovery, it is known that he has separation anxiety where his future owner won’t be able to stray too far away for extended periods of time, but let’s be honest… just look at him. Why would anyone want to?

With the help of the RSPCA, Chip is now on the hunt for a new loving home. With recommendations that his next family be experienced and knowledgeable on special needs animals, has potentially previously lived with a cared for a dachshund, and is not currently owning any other pets, Chip needs all the help he can get in finding his forever home and family.

We all hope that Chip’s next owner will be able to provide him with the unconditional love and support he longs for and deserves.

Of course, if you know of anyone, please tell them about dear little Chip.

Enquiries can be made via the RSPCA website at: https://www.rspcansw.org.au/chip/