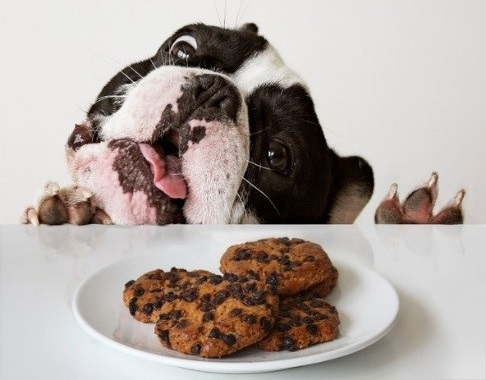 We have all been there. Trying to quietly peel back the wrapper of our favourite chocolate indulgence so Scruffy doesn’t hear it and come charging around the corner to pout, glare and want to share… After all, who can resist that face, right?

When it comes to chocolate, you should!

It’s hard to believe that such a scrumptious temptation that gives us humans the tingles, can be so dangerous to our beloved four legged family.

Chocolate toxicity is actually one of the most common causes of canine poisoning, directly due to a chemical compound found in cocoa called Theobromine.

This scrumptious yet nasty little compound is toxic for dogs, and if consumed in large quantities can result in frightening sickness including cardiac, lung, kidney and central nervous system dysfunction and disease.

Keep an eye out for the trail of left over wrappings, or other symptoms associated with theobromine ingestion in dogs, such as hyperactivity, trembling, vomiting and or diarrhoea, increased heart rate, seizures and in some cases it can even be fatal.

Stress less as there is an alternative!

Carob is not only a great alternative for its naturally sweet flavour, but has many other not so known benefits, such as containing good levels of vitamin A, B, B1, B2, B3, B6 and D, calcium, iron, magnesium, potassium and protein, making this little ingredient a seriously fun and healthy choice. Some people call it a superfood as it is also a great source of fibre to improve digestion, aids in lowering cholesterol, and can be used to treat diarrhoea.

Now that is a decent resume!

Now, we don’t want anyone to miss out around here, or be in the bad books for not sharing, so the best option is to grab a bag of the best alternative to choccy for Scruffy, the ever popular Blackdog Carob Buttons.

Of course, variety is healthy, so we also offer natural Yoghurt Drops, which are great as an everyday treat,fantastic training rewards…. and with both the Carob and Yoghurt, you can even nibble away on Scruffy’s treats as they are perfectly safe for humans too!

Exciting times ahead at HQ too, so keep an eye out for some new and exciting Blackdog Carob products available to order very soon… 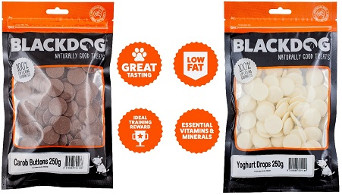